It’s safe to say that many people will not be comfortable reading this book. Yet I’m glad that young adult literature has been strengthened in recent years to the point where at least some readers are expanding their comfort zones to explore areas that are outside of the box, even if they do not encroach on issues quite as taboo as that in Forbidden.

From those readers who decided to take the plunge into potential intellectual discomfort, 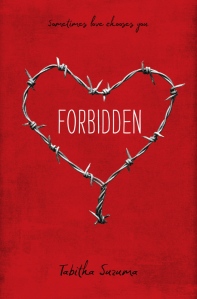 I’ve read overwhelmingly positive reviews of this book, at least in the sense of its emotional resonance. Because of these reviews, I was also prepared for the heartbreak that Forbidden promised, and perhaps wasn’t as invested in the story for that reason. The shield I erected at the start of the novel certainly helped to dampen the inevitable pain, but I attribute my lack of tears (in contrast to the general consensus of outright sobbing) to Suzuma’s characterization of Maya. I was never really able to buy Lochan and Maya’s connection as one born of premature responsibility, respect, and sincerity because Maya continually came across as immature and naive. In order to garner the understanding necessary to ensnare readers’ sympathy despite their natural aversion to the taboo subject matter at hand, Suzuma needed to build a solid foundation for Lochan and Maya’s feelings to rest on, and it’s her failure to do so that left me dry-eyed at the end.

In contrast, I could more easily believe the evolution of Lochan’s emotions, perhaps somewhat perversely since it would seem that he, as the self-proclaimed primary caretaker and eldest of the household, would seem to emerge as the character for whom we would expect Maya’s feelings to develop. Yet the interplay between Lochan’s extreme social anxiety, the stressful burden of raising his siblings, and his confusion regarding his feelings for Maya seemed to me a more understandable environment for such feelings to develop (if in fact that environment exists at all) than Maya’s comparably uncomplicated mentality. I would have liked for Suzuma to focus more heavily on Lochan’s psychological issues and perhaps probe into the overlap of his conditions, which could easily have been accomplished by cutting out half of the unnecessary descriptions of the siblings. While the secondary characters might have provided a critical backdrop, the extent of their inclusion in the story seemed somewhat tedious to me and did nothing to propel the plot nor elucidate what was occurring in either protagonist’s mind.

Forbidden could have been an interesting study of the effects of environment on psychology if focused more heavily on Lochan, yet I feel that Suzuma missed the mark with overly-prolific and repetitious passages in which Maya and Lochan circle back to the same problems while lamenting their situation. While the ethical considerations raised by this book will no doubt make for interesting discussion, Suzuma failed to enthrall me as she has so many others.